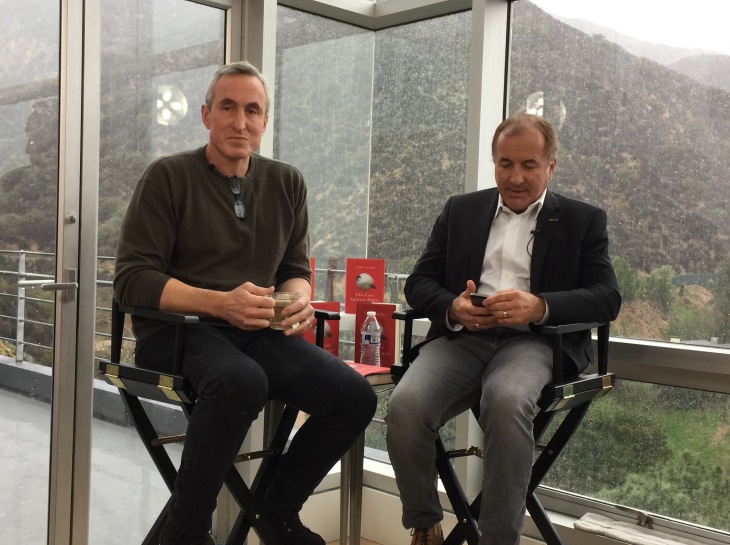 I’ve finally solved the mystery that’s been plaguing me for years.  You wouldn’t believe just how much time I’ve wasted obsessing over Gary Taubes, and how he could proclaim, with a straight face, that all of nutritional science is wrong, and it’s carbs that make you fat.  Almost daily, I’d ask myself, “Could he really think all those metabolic ward studies were poorly designed?”  I’d think deeply, then tentatively conclude, “There’s no way he would do this just for money.”  It wouldn’t be worth the constant ridicule from the entire scientific community.  Plus, you couldn’t convincingly fake a position for so long.  But then I’d go back to wondering how he could possibly dismiss all the published scientific studies, and so on, leaving me endlessly looping over this riddle.

As you know, I lost 25 kg on a high-carb, low-fat diet.  This is the kind of diet Gary Taubes hates.  He hates it, because he thinks it’s wrong, and the worst advice you can give to anyone.  He feels the government and “experts” have been pushing it on the public ever since they blew it on saturated fat 50+ years ago, and its unexpected consequences are the current obesity epidemic.  But don’t tell him that people got fatter because of fast food and sedentary behaviour.  He’ll tell you that exercise is ineffective for weight loss, or even maintenance, and we’re even exercising more these days, so it’s the carbs in the fast food that is the problem.  And don’t ever say it all comes down to “calories-in, calories-out”, because CICO is meaningless, and it doesn’t tell you why people are eating more calories, just that they are.  (He’ll tell you that people are eating more calories because of carbs and insulin or something.  It might take an hour to explain fully.)  And don’t tell him that there are billions of people who do fine eating a traditional high-carb, low-fat diet, like the Chinese, because he’ll tell you that they never ate any sugar.  And don’t tell him that there are traditional cultures in tropical regions that eat lots of starch (rice) with sugar (fruit), like the Thai, because he’ll probably tell you that they have specific genetic adaptations for this diet (I haven’t actually hear him say this, but I’m guessing it’d be his answer).

So, no matter what your argument that we’ve evolved eating carbs, etc., he has an answer for you.  They’re the same answers he’s been giving for 15 years, with occasional refinements.  I can pretend to be Taubes and refute each and every one of your points.  Or a bot can do it.  I don’t think I’ve ever heard as much as a equivocal concession from him that perhaps unrefined carbs are okay.

It’s all been mind-boggling to me.  Taubes has some undergraduate education in physics (he says he was a B- student, then got a C- in Quantum Physics [usually the first upper-division class], and finally changed majors to Engineering).  But he’s a celebrated, award-winning science writer.   But anyone with a science perspective, or even any common sense, would guess the carbs vs. fat question has already been studied to death, in many subtle and ingenious ways.   That’s what scientists do.  You’d think it’d have been a dead horse long ago.

But no, Taubes says that “over 80 years of experiments, 80+ studies, 4,094 test subjects, and 1.2 million subject-days” have yielded “no definitive answers” on the matter.  He emphasized this belief in the literature for his “non-profit” NuSI foundation.  Through his Energy Balance Consortium, he’d hope to conduct

a series of “Manhattan Project of Obesity” experiments, to finally determine once and for all if it was carbs making everybody fat.  Of course, as all diet-nerds know, his very first pilot study with Dr. Kevin Hall returned an answer last year that his critics expected, but that no low-carber would accept.  Even with wildly different serum insulin levels, there was no statistically significant weight loss difference between an iso-caloric ketogenic diet vs. a high-carb, high-sugar, low-fat diet in their very expensive, two-month metabolic ward crossover study of 17 young, overweight subjects. [1]  Dr. Kevin Hall then pronounced the “carb-insulin” theory of obesity “falsified”. [2, 3, 4]  Not surprisingly, NuSI subsequently lost its funding, through Taubes stays on, unpaid, seeking new wealthy investors [5].

But of course, this still doesn’t change Taubes’ mind, or even make him consider alternative possibilities (like everyone else is right).  His spin on the whole affair is that the data supports his position.  Which just left me more astounded, wondering how he could see it that way.  I never believed he could be a deliberate fraud, because those guys are so obvious.  And he didn’t seem like a total crank, because they all have tell-tale signs too.  (For example, Tim Noakes comes off as a sincere but total crank, Mark Hyman looks like a con man, I’d trust Mercola as far as I could throw him, Peter Attia is a NPD blow-hard capable of crying on cue, etc.  Without exception, they’re 100% detectable.)

But Taubes fooled me with what sounded like pleas for scientific inquiry.  This will always get a nerd’s attention.  I never believed a word he said, but he fooled me into thinking he was actually looking for an answer.  So like Lucy and Charlie Brown, he’d tee up the football of “prove me I’m wrong” in front of us, tempting us to run up and kick the ball out of the park, but he’d pull it away at the last moment, leaving us dazed and embarrassed, but more determined to try harder the next time.

So last weekend, I finally got my chance to kick the ball out of the park, at an intimate book-signing affair for his latest “The Case Against Sugar”.  I drove two hours north to Pasadena in the pouring rain, and arrived early enough to sit in the front row, just feet away from the object of my obsession.  There were only about 60 people in the room, and well-known skeptic Michael Shermer would interview him, followed by a 45 minute Q&A session with the audience.

Ok, honestly, even though I’d long day-dreamed about the line of questioning I’d put to Taubes given the chance, I knew I wasn’t even going to ask him a single question that day.  I knew it’d be useless.  No matter what you’d ask, he’d already have a pat answer prepared, or he’d use the same rhetorical techniques he’s used over the last 15 years.  (He’d aggressively interrupt you, pretending to be interested in some scientific aspect to consider, and end up taking over your question, etc.)  Plus, there’s always a lot of other people asking dumb personal questions, so you’d never get much time.  And I was just obsessed about his motivations, not his bad science.  And I’m a horrible speaker.

[Actually, the guy sitting next to me, Peter Voss, a stick-thin calorie-restrictor of 19 years, ended up in a mini-debate with Taubes over “calories-in, calories-out” (CICO).  Voss said you could control body weight by adjusting the calories you ate, and Taubes got slightly agitated and repeatedly told him CICO was “meaningless”, and started with the whole “let’s say you have a lot of people in the room” hand-waving analogy, making things less clear.  Gary controlled the guys question until no one knew what they were talking about anymore.  Oh, and Gary told the CR’er he could eat more if he focused on fats.]

But all during the talk, it became clear to me that Taubes was fixed on his belief that nutritional science had got it wrong, and that he’s the only person in history to review the literature and realize this, and to make a scientific argument against CICO (i.e., his 2007 book “Good Calories, Bad Calories”).  He can say this with a straight face is because he knows he’s right.  Carbs make you fat.  Plus, he’s built up a whole belief system and set of fact-twisting arguments supporting it.   He’s long done listening to any counter-evidence.  He’s worked out every reason to dismiss it all, via misinterpretation or mischaracterization, if necessary.

Taubes literally believes that everyone else is wrong, and only he is right.   [He told us that conventional nutrition scientists all suffer from groupthink, and no one will rock the conspiratorial boat.]  Occam’s Razor tells him he’s right.  He refers to it frequently lately, because while he admits he can’t prove his assertions, he says that Occam’s Razor supports his hypothesis.  Of course, this drives me crazy, because he insanely misinterprets Occam’s Razor.  He describes it as preferring the explanation with the fewest number of elements.  And since the conventional explanation for the obesity epidemic is “complex and multi-faceted”, it basically loses by [his] definition.  Of course, Occam’s Razor prefers the explanation with the fewest assumptions, which is just a proxy for overall likelihood.  (Consider the probability that every nutritional scientist got it wrong over 50+ years, AND they’re suppressing the truth, AND no one except Taubes can see it, etc. vs. the probability that “people just like to sit around and eat”.)

For someone uniquely holding the solution to the global obesity crisis (Is it carbs, or is it sugar this time?  Someone from the audience asked him this, but I don’t remember his answer.  It must have been long-winded), you’d think that science would come running to hear the details.  Oh I forgot, there’s a conspiracy.

I don’t think Gary Taubes is a fraud, as Evelyn (aka Carbsane) has claimed.  At least not in the mustache-twirling way, scheming how he’s going to get rich by making us all believe that carbs make us fat.  He’s more of a vocal, biased partisan making a living from his passions.  I don’t have any problem with that.  (I used to worry about the mustache-twirling, but I feel better now after meeting him and seeing how he thinks.  Hint: like a lawyer who will twist facts.)  Bottom line, he’d still probably insist that carbs make us fat, against all the evidence, even if no one was paying him for his views.

Although I had plenty of opportunities to corner Taubes and waylay him with a few one-on-one questions, I completely avoided it.  I kept it to a few words in the reception line, and gave him his space as we were getting our coats. He knew I was a critic.  If he wanted to discuss anything, I’d let him initiate it.  But we let it alone.  The most we acknowledged of the multi-year, fairly personal, raging online diet wars was Evelyn.  “Who?”  “Evelyn from Carbsane.”  “Oh, Eeeviee!”  That made my trip.

Look, Taubes gets it constantly, probably from his normal-eating friends, and maybe even from his semi-vegetarian wife.  It’s not an act, or at least he never breaks character.  He’s heard it a million times before.  He didn’t need to hear it again from me.  That’s the best thing about meeting someone personally versus flaming each other on Twitter.  You recognize that the other person is a human being.  (I’m a grown-up.  I know that wrestling isn’t real.  Taubes does too.)

The summary.  Yes, he really believes it.  No, he can’t prove it.  No, he’s not listening to any counter-evidence.  No, he’ll never change his mind nor admit to even the smallest of conceptual mistakes.  Why?  Because he’s more like a smart lawyer who never breaks character, and not even close to a scientist.  Besides, there’s no going back at this point.